Speedboat Challenge, by WS net, started off as a free to play phone game. Speedboat Challenge is a boat racing game, where you have 4 of 5 main maps, with a few different configurations on each. You race against computer controlled AI as you work your way through 10 levels of races. 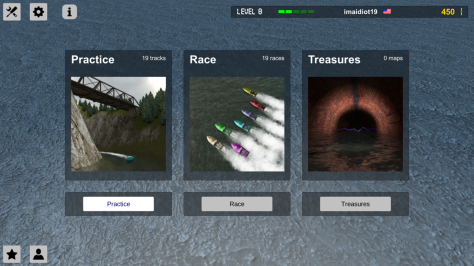 The game features simple racing, and the racing itself isn’t that bad, as long as you are the only boat on the course. The boats control ok for the most part, especially once you are able to perform some upgrades. The upgrade system in the game is pretty standard, with various options to upgrade like increasing your engine speed, boat weight, etc. Each upgrade makes your boat faster, but you also have to increase your boat turning ability so you don’t easily flip over. As you proceed in the game, each level requires you to upgrade more and more.

Luckily there are treasures that can be unlocked which provide you with bonuses to help you upgrade. One map is provided to you from the beginning, which unlocks 2 free upgrades when you touch the chest. I would recommend upgrading your engine twice. The remaining treasures provide you 5000 coins each, and there are 3 to unlock. You do not need to unlock the map to find them, but just need to know their location. You can apparently unlock them during a race, or in practice, but I would do it in practice so you don’t mess up your race. Sadly, there are only 5 treasures to find. I wish there were more, because they were the highlight of the game for me.

The game also includes practice mode, so you can get used to the races, as well as some leaderboard and player customization options. The leaderboards show the top record breakers, the top player time on each track, and the local times for each track. The player customizations include the option of being a male or female, choosing your boat color, and choosing your country’s flag.

Well, this game for the most part, is bad. Some of the issues could be fixed with a patch, but it isn’t likely that it will ever be patched. To start, for some reason, the devs thought it would be a great idea to make the left trigger be the accelerator. I’m not sure I have ever played a racing game since the adoption of triggers that didn’t use the right trigger as the accelerator. The AI in the game is programmed to pretend you don’t exist, and when you race with them, they will drive right over you. They have their set programmed line, and they do not stray from it. Even if you are in front of them, they will plow right through you and wreck your boat.

This leads me to another major issue with the game: there is no reset option, and no warnings when you begin to go off course. This means if you crash once and are stuck, or your boat is flipped, then your race is over. Also, if you ever leave the imaginary boundary for the race, or accidentally go past a cone, your race is also over. Most games allow you to easily reset your boat, or force restart you back on the track if you go past a boundary. There is also no ‘restart’ option. If you false start twice (which will happen to you at least once, I’m sure), you are required to start over.

This part wouldn’t be so bad, but every race after Level 1 requires a coin deposit to start the race. If you crash, get stuck, cross a line, or are just behind and want to restart, you are required to use another coin deposit to start the race over. Not that big of a deal, right? Oh wait, each level increases the number of coins required to start a race. Toward the end, when each race costs 1000 coins or more, while you are trying to save up for upgrades, all while having to repeat each race multiple times due to the AI slamming into you and flying past you like you are sitting still on the last lap of the race, means that you will be doing a lot of grinding of lower level races to save up enough coins to continue. 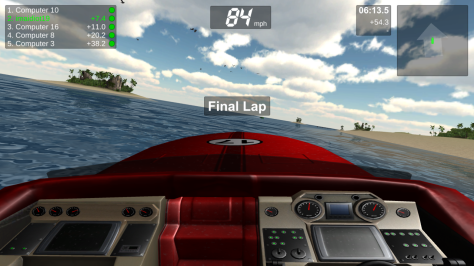 Along with the other issues, and the left trigger as the accelerator, the B button is the pause button. If you happen to press it twice, you are backed out of the race. Even if you press B twice by accident at the beginning of a race, you just wasted whatever coins it cost you to start it. There is no way to change any of these controls, other than by utilizing the Xbox reconfiguration option. I didn’t feel like changing my controls for every game for this one game, so I just dealt with it. Control options would be a great addition. Also, for some reason, both analogue sticks work as acceleration, braking, and steering as well.

When you are in a race, the game gives you a heads up display that shows your speed, position, and a generic mini map. This map could be improved by actually showing a map of the track with your spot on it. Even if it was a dot, it would be helpful. Instead, this map has an arrow overlay that moves with the direction you need to go. Only sometimes it isn’t helpful at all. The tracks are sometimes coned off for where you need to go, but other times they are not coned off at all. You will go the wrong direction, and then you will be instantly disqualified. It is very annoying and frustrating. Want to know what lap you are on? You better look as you start a new lap, because that is the only time it shows. It would be great to know what lap you are on further into the race. If you happen to be focusing on the race at the moment it pops up, you missed out, and have to wait to learn what lap it is.

So, you are now in a race, and you are in first place! Congrats, you are 10 seconds ahead of the second place racer on the last corner, so it should be an easy win, right? Well, not in this game. The rubberbanding in this game allows a race to speed right behind you, and will most likely pass you right before the finish line. It seems the AI has a few preprogrammed options, and likes you to finish second or worse a few times before you are allowed to win. This may not be the case, but this is the way it seemed to me. 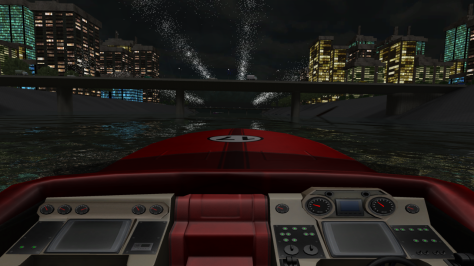 Navigating around the menus in the game are near impossible to get right without multiple tries. Someone had the idea to make the highlighted color menu option be only 1 shade different than the rest. If it was a few shades darker, or a different color, it would be much easier. This way you aren’t moving around trying to figure out where the cursor is or accidentally selecting the wrong option and wasting valuable coins.

The sound, graphics, and AI require other work as well. The sounds in the game are like the default sounds from Unity. The splashes and crashes all sound the same, and just don’t have any pop. The music tracks that play in the game seem like something from a 70’s porn, and there are only a few tracks in total. This game would be a good time to try the new background music feature added to the One. The graphics are also very generic, and trees pop up as you pass them. The sky is pasted on, and every bird all over the world seems to be a crow. The AI names were thought out. Names like ‘Computer 5’ and ‘Computer 17’ are some examples. I know this is a minor issue, but anything would be better than those names.

The achievements in the game are very straight forward. Basically, complete each race that it moves you to and you will unlock all of the achievements when you complete level 10. This may seem like an easy feat, and although seemingly simple, it will take many hours based on your luck with the AI. Other than that, there is nothing special with these achievements.

Reading back up through my review, as you can see, there is much more Bad than Good. This game could be a nice simple racing game with a few fixes. The AI needs to be improved to react to the player, there needs to be an option to restart without costing more coins, and there needs to be control options. Although there are many other things wrong with this game, with those 3 changes, it would at least be playable and somewhat fun.

To top everything else off with this game, they are charging $13.99. This was a free phone game (which I imagine was pay to win and most likely charged for coins)…but $13.99 for this? If this game was $5, or even less, it would sell many more copies. As of the time of writing this review, 15 people have started it, and probably half of those were review copies. I think a price change and patch to fix the major issue is in store or this game is going to go stale quick.

I cannot, in good conscience, recommend this game. If the devs can prove they can fix the issues and the price, then I could at least recommend it to the achievement addicts out there. But for now, alas, I can’t. I have played worse games, but this game is so frustrating and broken, that it isn’t fun. There are much better games for the same or cheaper price that are much better value.

Speedboat Challenge is priced at $13.99

A copy of the game was provided by the publisher for the purpose of this review.